What does Elvis mean to you?

In early 2000, I saw Johnny Cash walk into a studio in LA, old and ill and temporarily blind (he had toward the end of his life a condition that affected his sight), sit down and sing a song, then transform into a higher being. I have seen Nina Simone climb a flight of stairs to the stage at the Royal Festival Hall in London, barely able to walk, sit down at the piano and be transformed. I have seen Shane MacGowan stand on stage at a concert in France after taking ten LSD trips, and not knowing where he was, shuffle to the microphone, begin to sing so very beautifully, and be transformed. These transformative moments encapsulate the religious nature of performance as they imitate the crucifixion and resurrection of Jesus Christ Himself. This narrative of suffering and rebirth is played out again and again within our own lives, but I believe it is captured most beautifully, within the musical performance itself. Through the boundless power of music, a performer transcends his or her own wretchedness by performing a kind of public exorcism and by doing so, transforms into a deity.

In 1981, in London, I saw the movie This Is Elvis. I had always been an Elvis fan, with a special love for the songs he made in the seventies – Suspicious Minds, In the Ghetto, Kentucky Rain, Always on My Mind – and had a particular obsession with the gospel album, How Great Thou Art that he recorded in the early sixties. The last ten minutes of This Is Elvis changed my ideas on performance forever.

In the final minutes of the film, we see Elvis, on stage in Las Vegas, sing the famous so-called ‘Laughing Version’ of Are You Lonesome Tonight? The camera begins with a long shot and does a slow zoom in on Elvis’s face. Elvis is stoned and overweight and by the time he performs the disastrous central monologue, we can see the pure anguish of his performance, the drugged and mortified eyes, the terrible aloneness, the horror of the moment – his vast soul crucified on the cross of his own body as he blunders through the words. It is one of the most traumatic pieces of footage I have ever seen. This is followed by the medley, An American Trilogy. Elvis dies and as the world media reports his death, we hear him sing Dixie over shots of his funeral procession. We see the motorcade, the weeping crowds, the coffin, and the flowers, as the film returns to the Vegas concert and Elvis sings the eternally beautiful All My Trials. To me it is immeasurably moving, Elvis’s head bowed, his extraordinary voice steeped in sorrow – then the band rises, he lifts his head and sings The Battle Hymn of the Republic and Elvis is resurrected, triumphant. It is pure religion and as powerful as anything I have ever seen. The final shot of him, in slow motion, arms outstretched, the angel wings of his silver cape flung wide, shows his exultant ascent into heaven.

As I walked from the cinema, I was left with these three images – Elvis’s mortified, tear-streaked face; his head hung in sorrowful acceptance; and his caped arms outstretched in triumph. These are the stages of Christ’s passage upon the cross, the anguish, the sufferance and the resurrection, a journey which welcomes us all, in time.

Elvis continued performing until the end. In my eyes, he was some kind of angel; both terribly and awfully human yet divine in his meteoric reach that touched so many hearts. He was fallible and God-like at the same time. He crucified himself on stage in Vegas, at the supper show and the late show, hundreds and hundreds of times. His latter years on Earth were as sad and lonely as any can be, but his Vegas performances were epic triumphs of human transcendence, where the angels looked down on one who had fallen so far, then looked up to where he ascended. 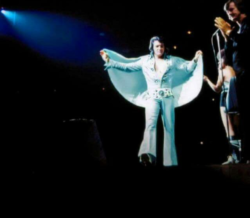