How do I stop fearing the end of the world? 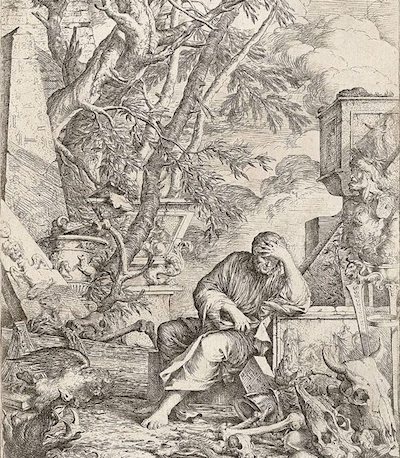 DEMOCRITUS MEDITATING AT THE END OF THE WORLD 1662

Do you practice meditation?

The filmmaker, David Lynch, described the practice of Transcendental Meditation as catching the big fish. I read that he has been practising it since he had a breakdown around the time of making Eraserhead, over forty years ago. He claims he has never missed a meditation. If that is true, I am greatly impressed. The basics of TM are taught during a three session course, at the end of which your teacher gives you a personal mantra. Anyone can do it. It is effortless and there is nothing to get right or wrong. I have been practicing for around six years and found it to be instantly and radically beneficial. So, to answer your question, Maia, from the first time I meditated, I stopped fearing the end of the world.

I found that it also helps with low-level anger, uncommunicativeness, resentments, impatience, passive-aggression, depression, self-obsession, hatred of the world, blaming others, wanting to murder and maim people and a host of other maladies that I had been dragging around and allowing to define me. Meditation modulated my calamitous internal thinking, and the freaked-out tyrant residing in my head that represented the worst possible version of myself was largely deposed.

I also found those big fish down there in the depths, the deep creative ideas which David Lynch talks about, wild, bright and thrilling; but more importantly, I found a fundamental understanding of the next right thing to do, of making the choice of the least destructive course of action.

Unlike some meditation techniques that focus on a life lived entirely within the present moment, Transcendental Meditation seems to radiate backwards and forwards in time, evoking our common humanity and our deep connection to the earth’s inheritance, as it layers us in meaning. It may not hold back the end of the world, but it reduces the element of fear, allowing us to administer to the world more effectively. TM also implements a kind of mysterious reinstating of the soul, a honeying of life, a merciful acceptance of suffering, and reminds us of the incredible privilege it is to be alive.