Did you ever want to simply give up and quit, because of your inner voice? 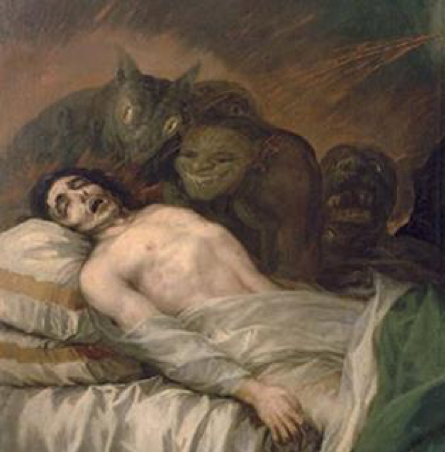 Have you ever suffered a crisis of confidence?

I hate myself sometimes and wonder why I even bother.

Do you have a harsh inner critic?

Dear Ursula, Joe, Rod and Sophia and many more,

I don’t know how many times I have been asked this question, or a version of it, in The Red Hand Files. Let me say this – the ‘harsh inner critic’ that you speak of is in no way unique to you. The truth is that virtually anybody who is trying to do anything worthwhile at all, especially creatively, has seated in his or her brain, a horrible homunculus that blows a dreadful little trumpet, and only knows one song – a song that goes, “You are not good enough. Why bother?” This evil little gnome is full of bad jazz, and is, in the words of author Sam Harris, “an asshole.” The enemy of aspiration, this atrocious inner voice demands you turn away from whatever your higher calling may be and become a second-rate, cut-price version of yourself. As your very own personal detractor it is deeply persuasive in its dark business. Many of us listen, many of us accept its message, and many of us throw up our hands and give in. The problem is, of course, that this inner voice, this monstrous homunculus, is you.

The creative act is an act of war – but as much as this inner critic is your adversary, it is also fundamental to the creative process. It is what anyone worth their salt is doing battle with all the time – we are in a perpetual dogfight with the lesser version of ourselves. To lose the battle is to become the embodiment of the homunculus itself. Defeated, we do nothing but sit in perpetual judgment of the world, idly watching, as it goes down in flames. As vicious as this fight with our own selves may be, it is this very conflict that puts the blood in the art, the tears too, and carves the battle scars deep into the work itself.

The world, for all its failings, is an extraordinary experiment in rampant human imagination. At its best, it exists because there were people who had the courage to follow through on an idea – who resisted the inner voice that said, “You are worthless. Why bother?”

I’ve said it before. Beautiful ideas abound. These ideas swim around us, ideas that can be of immense utility to world. Some ideas have our singular names inscribed upon them and it is our responsibility to reach beyond our lesser selves to the brightest version of what we can be and breathe life into these ideas. This act of reaching is almost always accompanied by the wretched homunculus and its dreary anthem of personal incompetence, but it is our sacred duty, to turn around and kick this little fucker in the balls. The fight with the dark force inside us is the forge in which true art is formed.

P.S.  A homunculus is a very small human or humanoid creature.